I have to say, that this comes from a guy, who hates LED lights. I tried many of them, and though most of them feature a CRI in the ballpark of 90, I was never happy with the skin tones. And yes, I’m obsessed with skin tones, cause skin is what I shoot most of the time. If you do a commercial for some technical device, like a blender, a watch or a smartphone, your average LED lights go a long time, but when it comes to skin, I usually prefer HMI, a good florescent tube, or even tungsten (in that order). So now I tried this new BladeLight, and was in for a surprise.

The first thing that you realize, after unpacking, this thing is build like a tank. It looks and feels like you could drive tent poles into the ground with it.

It basically is a extruded aluminum rail with the LED strip inside and two barndors attached. All solid metal construction, that clearly means business.

BladeLights come in 18″ and 36″ inch lengths. The lights can be attached either end to end or top to bottom to create a wider and/or longer light. The Profile is pretty low, so you can put it in pretty tight spaces or along ceilings.

Over the LED strip are 3 slots. You can use them to ether insert gels/diffusion,  or/and the “lens”, which changes the beam angle of the light. You can choose between 20, 60 or 120 degree. 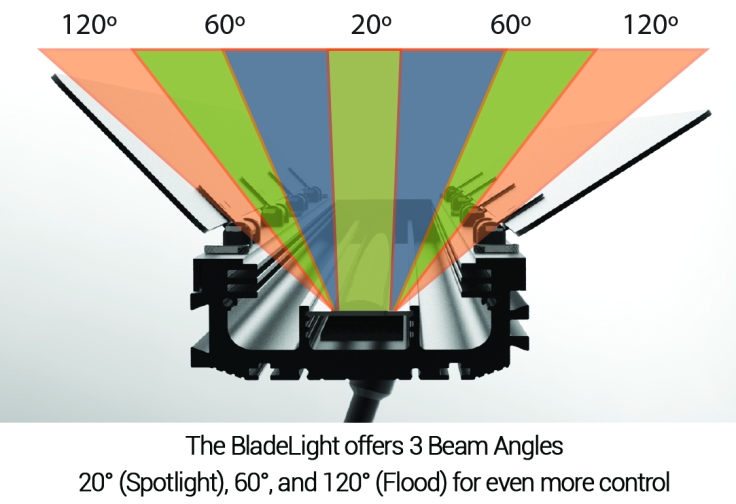 It comes with a massive AC adapter, that sports an XLR plug (love those), and a dimmer knob with an extra cable, for easy reach and placement, even if the light is somewhere on the ceiling. You can mount the light with the provided double ball mount (5/8 studs) on any standard light stand.

I measured the BladeLight very close to 5600 degrees  (I have the daylight version). Dimming it, changes the temperature a hair, but nothing to write home about.

Warming it up with the supported gels brings you close enough to tungsten, to use it together with some practicals, without having it standing out like a sore thumb. If I would use it in a sheer tungsten environment more often, I would get the tungsten version though.

To be honest, I didn’t expect too much. A CRI of 90 means actually nothing. Even KinoFlo tubes have a high CIR but can be green on the skin.

So the first thing I did, was shining the BladeLight on some skin. And lo and behold, much to my surprise it actually looked way better, than I thought. No green, nice warm skin. FloLight somehow managed to find some LEDs that actually work. Now I was interested. I took  closer look at the spectrum, and measured it in the ballpark of 95 CRI across the board. That was quite a surprise. Especially since R9 was around 90 – something you don’t see very often on LEDs.

The beauty of the provided plastic lens is, that you kind of “projecting” you light. This, in combination with the barn doors, give you the ability to do some really “surgical” lighting, like a single streak on a wall (soft or sharp), fancy eye lights andwhatnot, almost similar what you could do with Dedo lights.  But if you slip in the diffusion strip, the light wraps very nice around the face. Not like a book light, or a huge soft source, but still very nice, and super versatile.

Here are some interview examples from actual productions, with and without the diffusion gel .

I was really surprised by the output and quality (CRI) of the BladeLight, especially when it comes to skin tones. I love the build quality, and how rugged it is. The light is super versatile, because of the unique form factor and how you can connect several of the lights together.